K.M. Munshi’s book 'The King of Kings' concludes part of the Patan trilogy

The thrilling conclusion to the bestselling epic about a key moment in Gujarat’s history
K.M. Munshi’s The King of Kings is an incredible mix of romance, politics, intrigue and fast-paced adventure and the concluding part of the Patan trilogy

Penguin presents
The King of Kings
by
K.M. Munshi
Translated by Rita and Abhijit Kothari 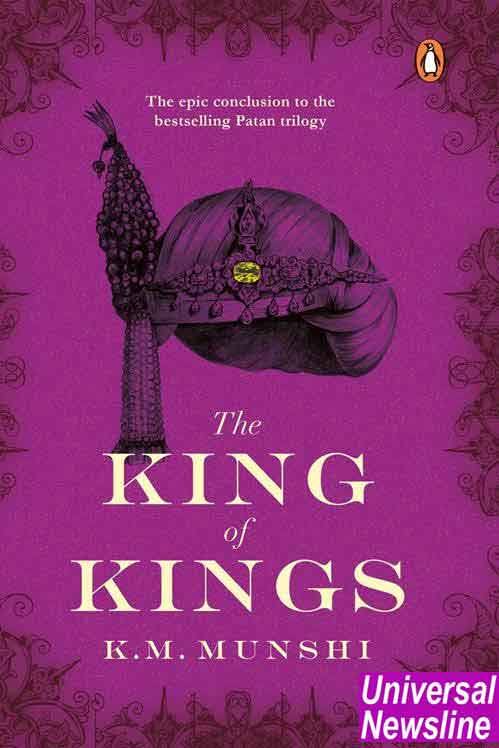 A mysterious emissary arrives in the port city of Bhrigukachchh. He has been sent by King Jaysinhdev of Patan with a secret message for Kaak, the valiant chieftain of the city. The king seeks to enlist urgently Kaak’s help in conquering the kingdom of Junagadh. However, Kaak has also received crucial summons from two others: Leeladevi, the firebrand princess whose marriage to Jaysinhdev Kaak himself facilitated; and Ranakdevi, the queen of Junagadh.

Caught in a web of conflicting loyalties, Kaak must navigate a treacherous terrain of political machinations where the slightest misstep could lead to grave consequences—where even he will not emerge unscathed.

K.M. Munshi’s magnificent conclusion to his beloved trilogy, The King of Kings is a panoramic epic filled with adventure and intrigue, and is a timeless classic with nuanced insights into human nature and the complex links between statecraft and violence.

The author:
K.M. Munshi is one of Gujarat’s most well-known literary writers. His historical novels have contributed profoundly to the sense of past that Gujarat lives with. A multifaceted personality, Munshi was a prominent lawyer, freedom fighter and politician. He was also the founder of Bharatiya Vidya Bhavan.

The translators:
Rita Kothari teaches at the department of English in Ashoka University, Sonipat. She is a leading theoretician in translation studies and has written extensively on Sindh, Gujarat and language politics in India. Her notable translations include Angaliyat: The Stepchild, Unbordered Memories: Sindhi Stories of Partition and Fence.

Abhijit Kothari combines sociology, business and management in his research and teaching. He lives in Ahmedabad, where he runs his own business.
at 10:31