Extent in Madness of Film Lovers 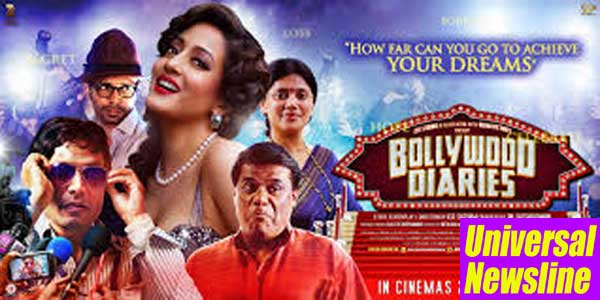 What is  Love to Cinema - Passionate about Cinema or Madness about Cinema. I would Prefer both, Like Showing Passion in Madness. Films like FILMISTAAN featuring Sharib Hanshmi, InaamUlHaq have come in past as a Tribute to Film Lovers and has been hugely appreciated. Now Lets see , weather Bollywood dairies establishes its name in Viewers's Dairy or not !

Well , Bollywood Dairy is a Simple story based on Life style of People in DILLI, who wants to pursue their career in Acting , and are waiting for their Ticket to Bollywood.

Director KD Satyam has conveyed his message through his Three Lead Protagonist , who Live Bollywood and want to come anyhow to Mumbai from DILLI.

The First one (Ashish Vidyarthi) who is well settled with his family in DILLI and works as Chartered Accountant, But not satisfied with his Job. So takes Retirement and plans to come to Mumbai when he get Heart Attack and then Hospitalized.

Second One , (Raima Sen) who is a Prostitute in DILLI and is mad about Bollywood, that she has given customers discount if they from Mumbai. One Asst Director comes to research about Brothel , and she is excited to meet him. She gives her story and later on Known face is casted. She in depression lands in Dance Bar.

Third One, (Gupta) is young boy of 27 who works in call Center and uses Work calls on his personal struggle calling up Filmmakers for chance. He gets mail from Bollywood Calling Audition Hunt and registers himself. In auditions, he does some harmful stunts on which Judges think he can built TRPs and use him for Two Rounds. He thought that he cleared Two rounds and now on Final Round . When auditioning for Final Round, on his Ticket to Mumbai - Judges de moralize him saying He doesn't know Acting on which He becomes Mad.

Music of the Film is good and sensatinal which takes you  aback in some scenes.

Review : On Performance wise, No Doubt all Characters were Brilliant in their Cults. Story was Good, But too Over at Times. Can't Help, But this is happening in Small Towns outside Mumbai who think "Mumbai is Ticket to Bollywood"

Tips to Newcomers : I would sincere request, instead of thinking to come to Mumbai and then struggling for Bollywood is of No use. Today Bollywood has changed, and gone more into Digitally. Instead of seeing that some one calls me, or Talent Hunt(which are pre planned on who is Winner) and Hunt they just do to built TRP's .

Be you Own Boss , Create your Own Team in your Home State , Write a Good Content & Make SHORT FILMS. Upload on YouTube Channel which is Globally. Send your Entries to Film Festivals and if its good , will be Appreciated.