New Delhi, 22nd September, 2015: Red Herring 100 Awards are widely recognized as one of the industry’s more prestigious recognitions, with thousands of companies from each continent competing for a Top 100.

Sagacious IP, founded by Mr. Tarun Kumar Bansal and Mr. Anant Kataria in year 2008 has been recognized as one of the 100 most promising venture in Asia and was awarded the Red Herring Asia 100 Award 2015 in an award ceremony organized at  Manila, Phillipines.

The Red Herring Top 100 award highlighted  the most exciting startups from Asia, Europe and the Americas in which thousands of companies from each region were reviewed in a rigorous 3-step process that looks at all aspects of the company. 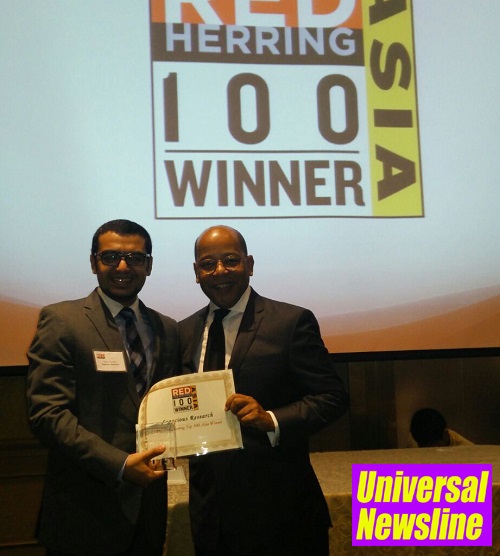 Sagacious over the last 8 years has helped a number of innovators with their IP/Patent related aspects and has recently widened the horizons of its services to include a more end-to-end support approach under an arm “Centre for Future(CFF) / Idea to Market (I2M) ”. This arm of Sagacious helps innovators take their ideas from mere idea to market ready products and revenues. CFF/I2M helps innovators right from optimizing their ideas by helping them with technical brainstorming, prototyping, lab testing, market feasibility analysis and finally by getting on the ground to do actual sales and distribution for them in both retail and B2B segment.

Mr.Anant Kataria,Co-Founder and CEO of Sagacious IP, says, “It gives me pleasure and pride to announce that we have won Red Herring Asia 100 award at a ceremony held in Manila, Philippines. There were very interesting companies from all across Asia – and it was a highly energetic and high-performing group of people to compete with. This is recognition of the diligence and hard work put in by the entire team at our company and innovations we have done over the years.”

Alex Vieux, publisher and CEO of Red Herring said, "Entrepreneurship in Asia has reached an inflexion point, and as a result, Red Herring Asia 2015 has shifted into a new phase. A second generation of entrepreneurs with CEO backgrounds is emerging and their execution skills and global ambitions lead to restless growth and amazing journeys."

SAGACIOUS IP is a global player offering Comprehensive IP solutions, through a robust team of techno-legal experts, using state-of-the-art tools to deliver cost-optimized, risk-mitigated results to Corporates, Institutions and leading Patent Law firms. Sagacious Research an ISO 9001:2008 and ISO/IEC 27001:2005 certified organization, specializes in IP advisory on innovation management & portfolio management. The company is one of the best in the field with worldwide presence and several awards. With 5,000+Projects Delivered Globally, 600+Clients Serviced With Multiple IP Solutions, 100+Countries Covered in Searches 100+Trained Techno-Legal Experts, 16+Languages Used For Searches and 15+Fortune 500 Clients, sagacious has established themselves as one of the best in the field of IP. Sagacious Research has a team of Scientists and Engineers from Top Institutes, Industry Veterans, Researchers, Patent Agents. Sagacious research is Certified by Various governing/ renowned Bodies, CNBC young Turks also featured the founders in their show recently.