On a Sunday! India Marches for Animal Liberation 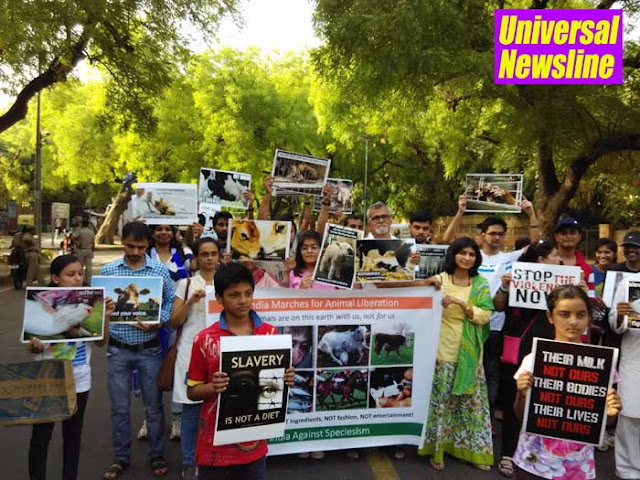 For the first time in India, a nation-wide march took place across 17 cities on Sunday (May 31st) evening to sensitise people to a basic fact: Animals are individuals like us who deserve freedom, not commodification. And when we consume animal-based products or services, we rob them of their deeply cherished freedom. Organized by a volunteer network called India Against Speciesism, scores of people across the country, from all walks of life, raised their voices against animal exploitation.

Various posters were used to draw attention to the acute misery caused by our demand for milk, eggs, meat, honey, leather, wool, silk, circuses, zoos, etc., which are totally avoidable. The participating cities included Chennai, Delhi, Mumbai, Kolkata, Bengaluru, Hyderabad, Pune, Jammu and many others. The city-wise details (routes, contact info, timings) can be found here. A key aim of the march was to spread awareness about speciesism, the unjust notion that excuses the exploitation of sentient beings on the basis of their species. Justice and kindness should not be confined to humans alone when we know that animals too can suffer acutely.

When it's unfair to discriminate or harm on the basis of gender, race, caste and religion, we ask how it is fair to exploit or hurt animals merely because they belong to other species. Our use, i.e., exploitation of animals for food, clothing, entertainment, labour, etc., is unnecessary. We can live healthily without breeding sentient beings into an existence filled with cruelty and oppression. In doing so, we can also realise many other benefits in the areas of human health, environmental sustainability and hunger. Plus, given the alternatives that exist today, not using animals or giving up animal products does not mean giving up tasty food, comfortable clothing, enjoyable entertainment, etc.


Quotes from some of the volunteers behind the march Supriya R (Lawyer): “As someone opposed to racism and sexism, I instantly realized that I must also stop practicing ‘speciesism’, which refers to the exploitation of innocents on the unfair basis that they are not human. Animals may not talk or reason like us, but the only thing that ethically matters is the capacity to suffer. So, it’s our duty to make choices that don’t make them suffer.”

Sankeerth Reddy (Graphics Designer): “Imagine being born just to be somebody else’s slave for your whole life! That’s exactly the story of the billions of animals that are bred, tortured and killed for food, clothing, entertainment, etc., every year. Had these victims been humans, we would’ve called this the worst genocide ever. And, this one is powered by well-meaning individuals like you and me!”

Ashraf Mohammed (Software Engineer): “Despite having been brought up in a non-vegetarian family, I stopped consuming all animal-based products & entertainment a couple of years ago, after I came to know about the cruelty caused by them. Animals want and deserve freedom just like us, so their use is nothing but abuse."

Susmitha (Food Blogger and Restaurateur): “Avoiding animal products does not mean giving up yummy food or comfortable clothing, as many alternatives exist. Animal milk and curd can be replaced by those made from coconut, soya, cashews, peanuts or almonds. Tofu tastes just like paneer, but is healthy and cheaper. We also have cakes, ice creams, cheese, sweets, etc., without animal ingredients.”

Atrocities on Animals in India: Some Facts and Stats:

Male chicks are useless because they don’t lay eggs and don’t grow fast enough for meat. So they’re crushed to death or discarded soon after they’re born.

India is the third largest producer of eggs in the world, with more than 20 crore egg laying hens.

To reduce the losses caused by the stressed birds’ pecking one another, they are de-beaked (the beak is cut) in a painful process with red hot blades.

At the end of their miserable lives, the birds are butchered barbarically in full view of their terrified fellow victims!

India produces about 23 lakh tonnes of poultry meat a year.


Chickens grown for meat (called “broilers”) don’t have it any better either. They’re housed in crowded and dirty conditions to reduce costs. They’re fed soy and other feed (that humans could also consume) to fatten them up quickly and sent for slaughter when they’re as young as 30-50 days, long before they become mature adults.

India is the largest producer of dairy, with an annual production of about 120 million tonnes using about 35 crore cattle.

Cows are forced into body-breaking cycle of pregnancy, birthing and milking throughout their life (either through common bull or an equally torturous process called artificial insemination) in all the dairies. These mothers also endure a lot of misery in not being able to spend time with their babies since the calves are taken away soon after birth.