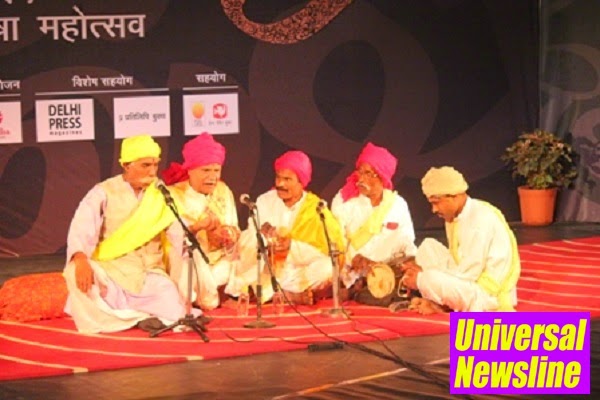 -        In tune with theme “Translations Transnations” Samanvay 2014 to put Bangla, Bhojpuri, Chhattisgarhi, English, Hindi, Konkani, Malayalam, Punjabi and Sanskrit in the spotlight
-        4th Edition of the Exclusive Festival on Indian Languages to feature more than 90 speakers and performers on 20 Languages and dialects across 21 sessions, 4 evening performances and workshops for children

New Delhi; 24th October, 2014: The fourth edition of India Habitat Centre (IHC) Indian Languages Festival ‘Samanvay’ is all set to again invigorate and entertain its audiences from 6th to 9th November 2014 in unarguably the most cosmopolitan city of modern India – New Delhi. Based on its theme “Translations Transnations” Samanvay 2014 will focus on Indian languages which have a transnational presence like Bangla, Bhojpuri, Chhattisgarhi, English, Hindi, Konkani, Malayalam, Punjabi and Sanskrit even while featuring 20 Indian Languages and dialects from across India and South Asia. For the first time, the festival will also host writers from other south Asian countries.

Bigger than ever before, this year Samanvay 2014 will see more than 90 eminent speakers and performers sharing their views with an ever growing audience spread across 21 sessions, 4 evening performances and workshops where the focus will be on Indian languages which have a transnational presence. This year Altaf Tyrewala, Anvar Ali, Arunava Sinha, Arundhathi Subramaniam, Asad Zaidi, Badri Narayan, CS Lakshmi, Darain Shahidi, Fakrul Alam, Gillian Wright, Harrish Iyer, Jerry Pinto, Koushiki Dasgupta, K. Satchidanandan, Melvyn Rodrigues, Madan Gopal Singh, Mrityunjay, Namvar Singh, Rudranarayan Panigrahi, Ram Gopal Bajaj, Saurabh Shukla, Swanand Kirkire, Syed Samsul Haq, Surabhi Sharma and Vinay Pathak apart from many more personalities will be representing an Indian language which has ceased to be confined to their boundaries. The idea is to bring together authors and translators across languages and national borders to discuss how languages and selves travel and get translated into each other.

Every year during autumn when the city is at its best 'Samanvay' is organized in one of the greenest and best managed urban complex of New Delhi – India Habitat Centre brings to people an exclusive festival devoted completely to the upliftment of literature in Indian Languages. Samanvay also aspires to provide a platform for bringing together expressions of human thought in the varied and diverse cultural contexts that have been nurtured and have flourished in many languages spoken in our cultural milieu. These conversations amongst brilliant and well-known writers will seek to bring to our audiences the sparkle of multilingual expressions and their inspirations.

Samanvay 2014 will be full of conversations around Indian literature, media, and translations, along with poetry performances and cultural evenings. Major highlight of this year’s festival will be tribute to UR Ananthamurthy, Bipan Chandra, Rajendra Yadav, Nabarun Bhattacharya and Khushwant Singh. Also, this year Samanvay Bhasha Samman 2014 will be conferred upon leading Hindi poet Ashok Vajpeyi for his “lifetime contribution to Hindi and Indian literature”. Accepting the award Mr. Vajpeyi said, “Literature celebrates life all the time. Sometimes life should also celebrate literature”. The difficult job to find an individual rested on this year’s Jury, chaired by K. Satchidanandan, and comprised of litterateurs Alok Rai, Udaya Narayana Singh, Sitanshu Yashaschandra and Raj Liberhan.

Beyond the language specific sessions, Samanvay endeavors to cover some of the issues that have shaped our intellectual and social life in recent times: this year it will witness sessions on The Information War; A Tryst with Modernity; Words without Borders; Imagining Pardes; Kiska Sheher, Kiski Zubaan; Displacement, Pathos, Songs; One Language, Two Countries; etc are a very integral part of the Festival.

Samanvay 2014 is the outcome of labour of love for the Literature of Indian Languages put in by the Team comprising of Festival Director Rakesh Kacker and Creative Directors Satyanand Nirupam and Giriraj Kiradoo who have been ably supported by an Advisory Committee comprising of distinguished writers, translators and Scholars like Arunesh Neeran (Bhojpuri), Damodar Mauzo (Konkani), Manisha Chaudhary (Workshops and Outreach), Nirupama Dutt (Punjabi), Pankaj Chaturvedi (Chhattisgarhi), Radha Vallabh Tripathi (Sanskrit), Ravi Singh (English and General), Rizio Yohanan Raz (Malayalam), Salma (Tamil), Subodh Sarkar (Bangla)
Announcing the Festival, Rakesh Kacker, Festival Director, Samanvay said, “We are happy that in last three years, we have been able to make Samanvay a platform of diverse and unique voices from Indian languages and dialects. The fact that it’s widely regarded as the only festival dedicated to Indian languages gives us a lot of satisfaction and throws in more challenges. As earlier, we hope to bring voices of dissent and agreement, hope and despair, anger and calm together to forge dialogues and partnerships that question and celebrate our ideas of each other and find ways of sustaining the unique diversity that constitutes our culture.

Satyanand Nirupam, Creative Director, Samanvay added “Samanvay 2014 picks up from where we left last year. After talking about the way languages connect and the connections they make in 2013, we now move to the boundaries and barriers they break across languages and across geographies. Into our fourth year, we have covered some ground in focusing on the extraordinary literary activity we have in the so-called ‘regional’ languages and dialects and have developed some understanding of how they deal with questions of identity and representation while engaging in ‘broader’ dialogues. We have celebrated the universality of the local and we hope to continue it this November via Translation, Transnation.”

Elaborating further, Giriraj Kiradoo, Creative Director said “Like its first three editions, Samanvay 2014 is an exercise in searching new forms of empathetic conversations and we’ll have more than two dozen sessions and workshops to attempt this. There are sessions on internal and external journeys of languages on the margins, on displacements and partitions inscribed in the collective memories, on dialects which are disappearing, on the confusing ties of mother tongues in the urban world, on body and text, on an ancient language’s tryst with modernity and of course on translations, cinema and issues like Right to Information.

The inaugural edition (2011) tried to explore the problematic of bringing various literatures under the master signifier: “Indian” and the mysterious bond that makes these various literatures at once distinct and collective. In 2012, the festival moved on to highlight and discover the heritage of Indian languages through the strain of Boli, Baani, Bhasha:  Gaon, Kasba, Shehar.  Even in 2013 the theme Jodti Zubanein, Judti Zubanein: Langauge Connections aimed at discussing the various kinds of dialogues across the 'regional' languages and their multifaceted interaction with the 'national' languages - Hindi and English.

National Book Trust is a collaborator for Samanvay 2014 and Delhi Press, Pratilipi Books are its partners. Le Communiqué Consultancy will be handling the public relations for the entire Festival.
at 01:10