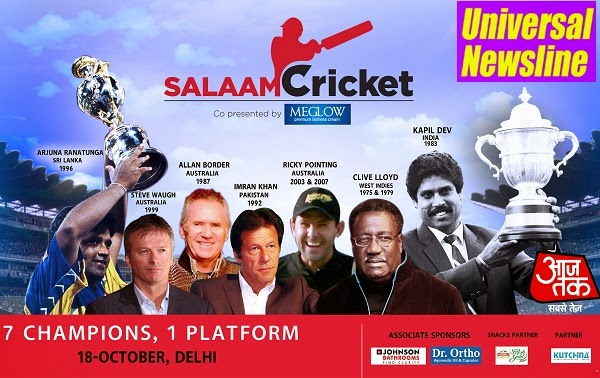 
The Legends come together on 18th Oct 2014, when India’s No.1 News channel Aaj Tak celebrates Cricket with the mega event – Salaam Cricket. As the countdown to the World Cup 2015 begins, 7 World champions and 14 Captains converge on one stage to usher in the battleground 2015.

Be ready to witness the historic union of legends to salute a game that's nothing short of a religion - Cricket.

Never before have so many great legends joined a conclave to debate the road ahead. Ever since team India lifted the trophy at the last World Cup after a gap of 18 years, the expectations are high. With eyes set on the trophy, the Conclave aptly titled ‘Kaise Jeetenge World Cup’ will be the biggest meeting point of top cricketing minds

Speaking ahead of the event, Supriya Prasad - Managing Editor – Aaj Tak said, “Aaj Tak will bring together the greatest legends of the game in this definitive event. The inspiring discussions and expert opinions from the stalwarts will surely have the cricket viewers asking for more.”

Ashish Bagga, Group CEO – India Today Group added, “The India Today Group is a leader in the space for creating benchmark News Events. Salaam Cricket with its inspiring line-up of legends on one platform is an Industry first that is a reflection of Aajtak’s commitment to being Sabse Tez.”

The day will start with session - “Winning the World Cup – Start of a Revolution” by world cup winning captains- Kapil Dev & Clive Lloyd. This will be followed by the session “Thunder Down Under” addressed by the former Australian World Cup Winning Captains- Allan Border, Steve Waugh and Ricking Ponting. The next session will have Yuvraj Singh sharing his thoughts in – Story of a Winner.

Emotions will run high around the session- India V/s Pak which will witness former Indian and Pakistan captains like- Sourav Ganguly, Kapil Dev, Mohammad Azharuddin, Ajay Jadeja, Inzmam-Ul-Haq & Aamer Sohail discussing the excitement and the high expectations when the two cricketing rivals go on to play.

The day will close with the World Cup winning captains sharing the stage in the “Seven Wonders: All WC Winning Captains on One Platform”. The session will have Clive Lloyd, Kapil Dev, Allan Border, Imran Khan, Arjuna Ranatunga,  Steve Waugh & Ricky Ponting sharing their views.
at 23:58