We want Maharashtra to be the No:1 State - Uddhav Thackrey 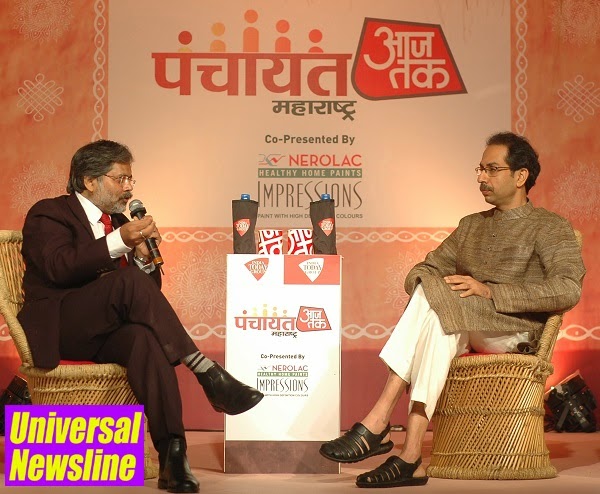 Mumbai 13th September 2014, At the Panchayat Aaj Tak held ahead of the Maharashtra Elections Shiv Sena Chief Uddhav Thackrey has for the very first time given a clear message to the people of the state almost pleading as well as determine that let he and his party given a first chance to rule the state.

Uddhav was quite upfront about his conviction regarding the Chief minister ship of the state. He clearly said that he is not the kind who run after the chair…but not even one who would shy away from responsibilities.

He even claimed to make Maharashtra the no-1 state in the country, if he Shivsena comes to power.

On questions regarding regionalism, Uddhav refuted the allegations on ShivSena. He asked that the formation of states on the basis of language was a part of the Constitution and Shivsena didn’t had any role to play on that. He however blamed the govt of Eastern states from where migrants comes to Maharashtra and other states.

The movement for separate vidharbha is a fight for development. The condition of Marathi population is a matter of concern for us. We have never applied force on non maharashtrian residents in our state.

Politics doesn’t mean scams and scandals. For me Politics is a medium to bring changes to peoples lives. If anyone is fights for the benefit of the people and is enbroiled in various court cases then i would day that i’m proud of that person.

I don’t have any hard feelings for the BJP alliance. There is no trust deficit between us. Talks are in for seat sharing in the coming elections. Delhi wave is present thru out the country, people of the country wanted a new face in Delhi….they got one in Narendra Modi, now its Maharashtra turn…if people will vote with responsibility they will surely get one.

Modi ji is no NawaZ Sharif, he is our PM and leader of BJP-Shivsena alliance also. If modi factor works in Maharashtra Elections, then why should we have any problem to that. We got collective success in Loksabha elections too.
at 23:28