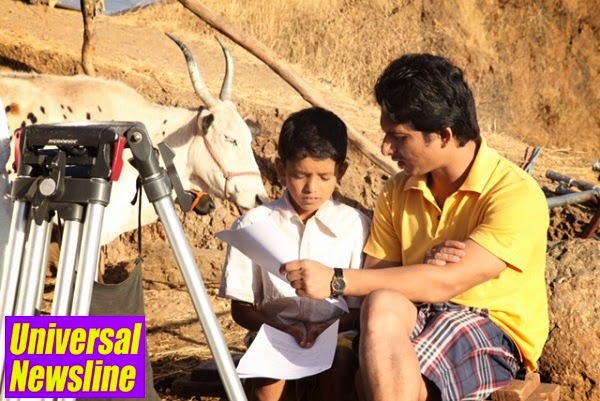 Bollywood cinematographer Laxman Utekar, who has donned the director's hat for the first time with Marathi film TAPAAL, is gearing up for the film's release next week. While it was TAPAAL's script writer, creative producer and presenter Mangesh Hadawale, of TINGYA fame, who helped Laxman cast the lead actors, we were curious to know how he zeroed in on child actor Rohit Utekar, for Ranga Rao's role.

"We were very clear since the beginning that the language and flavour of the character had to be from my village (Poladpur, near Mahad, on Mumbai-Goa highway). So three months before the shoot could start, Ashish and I took auditions for Rangya's character in different schools in and around Poladpur. We auditioned in almost all schools in that region and were tired of hunting the right face, but we didn't get one. Interestingly, one fine day I was sitting at my village home, thinking about what to do next, I discussed this thing with my brother. He suggested that why don't we search in the school behind our house and that is when I went there and took principal's permission to audition the kids," reveals Laxman.

He continues, "While we were taking the audition, the sun was about to set and we saw someone trying to create a shadow on the faces of kids giving audition. I started getting irritated with that. When I turned back to check who is doing it, I saw a kid standing on the pole on which we hoist the flag, creating the shadow. When I asked him what are you doing he said nothing. But basically he was trying to grab attention. I asked him to come down and tried clicking him. He didn't stand straight for even a second. And that is when I thought that he is perfect for Rangya's role. Interestingly, when I asked this boy, whether he has loved and proposed anybody, to which he replied in the affirmative. He shared that he wrote ' I love you ' on rice chapati by using sketch pen....And I found my Rangya!"


TAPAAL is National & International Award winning Marathi film set in a small village in the year 1977. It dwells with sympathy, concern and understanding on the bond between a little boy and a childless couple, and the social discrimination that they face.

Even before its release, Laxman Utekar's directorial debut is creating the right buzz. It has been critically acclaimed and has even won various accolades & awards at different film festivals for its sterling performances. TAPAAL had its World Premiere at 18th Busan International Film Festival 2013, South Korea. It was selected in Indian Panorama Section at 44th IFFI (International Film festival 2013) and 9 other International Film Festivals as well. It was also screened at 3rd Eye Asian Film Festival and Pune Film Festival. That's not all. Veena Jamkar bagged the best actress award at South Africa Film Festival. While Rohit Utekar won Best Child Actor Award, Prakash Holkar got the best lyricist award for his emotional composition 'don disanchi sawali ' at the Maharashtra state film Awards.
at 02:57