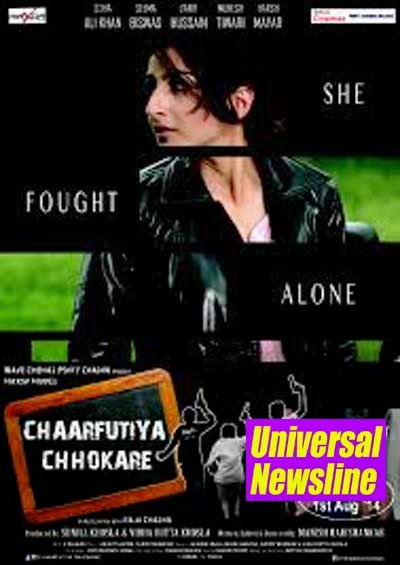 If we talk generally about a small Village in Bihar , what generally comes to our minds where majority of the people are poor due to which they remain illiterate , and as a result they became victims of Child Marriages , Child Labour which is a huge Crime. On such a emotional Issue , is based our film Charfutiya Chhokare which will reveal the inner shocking truth of Child marriages and how they are exploited.

Charfutiya Chhokare is a story of a NRI return Neha Malini (Soha Ali Khan) who comes fro  USA and is running an NGO company , thereby comes to a Small village in Bihar where she wanted to open a school so that she can spread education. When she enters the village , she slowly finds that Village is full of culprits and they don't allow the children to study and make them to labour. A Culprit named Lakkhan (Zakir Hussain) acts as the SURPANCH of village and wants to be GOD of villagers , Actually he has made scared everyone of his violence even the Police Bal Kishan (Mukesh Tiwari).

Small Child Awadesh who was living a normal life with his Mother Janki (Seema Biswas) and Father. His Parents get him married to Poonam at the age of 13, and the Culprits kidnap Poonam and kill his father and accordingly how Lakkhan becomes this small child's Father and turns him into criminal. Awadesh with his his friends Gorakh (Shankar Mandal ) & Aditya are bound to become Criminals , till they come across Neha. How Neha saves them from these crimals and she fulfils her dream of School in a small village like this, will see in the story

I am not telling  Charfutiya Chhokare  is a Commercial cinema , But It can be judged a Artistic Creatime Cinema which will reveal the Hidden unbelievable truth of Urban villages where Children are still exploited with Child Marriages and Child Labour , etc. Its high time that through education this can be stopped and put these culprits behind the bars who are responsible for this

This movie will see legends like LEKH TANDON ji on Silver screen who has given some Golden music to the Film Industry. Also will see Zakir Hussain in unbelievable character. Seema Biswas is too good in the movie in the form of a village mother.

Review : This film is not Commercial cinema , but can be described as Artistic cinema so Don't judge it with ratings. Charfutiya Chhokare should be treated as educational film , so that Child labour could be stopped in Urban villages.