Acharya Tulsi Birth Centenary Celebration Committee organizes a three-day International conference ‘Anuvrat International Conference 2014’ at the Bhikshu Auditorium in Chattarpur in New Delhi from 26th to 28th September, 2014. The conference aims to raise awareness on the burning global environmental issues. Eminent speakers, panelists and experts from over 22 countries have come together to present their thoughts and spark discussions towards the preservation of the environment and resources. 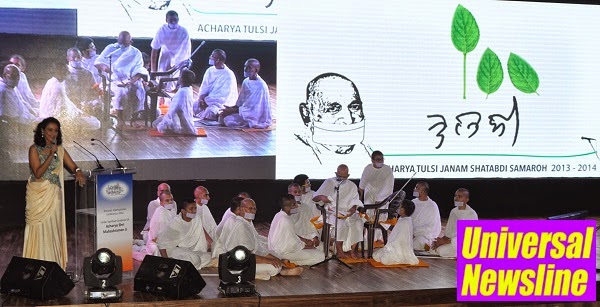 The conference is centered on three broad themes: Sustainability and Circular Economy, Ecology & Conservation of Environment and the Relevance of the Anuvrat Philosophy in day to day life.

The conference kicks-off with the inaugural address by Acharya Shree Mahashramanji, who reinforced the philosophy of Anuvrat that revolves around water conservation and preservation of the environment and advocated restraint (sanyam) on consumption.

“We are grateful for the support we have got from people across the world. Through this platform, we aim at developing a vast global audience, thereafter, hoping that the discussions and interactions will continue for the years to come. Ultimately it would spark a never ending global movement towards the circular economy, conservation of resources and preservation of the environment.” said Mr Surendra Borad Patawari, Convener, Anuvrat International Conference.

He further added, “The last 150 years of industrial evolution have been dominated by a one-way or linear model of production and consumption in which goods are manufactured from raw materials, sold, used, and then discarded as waste. The concept of circular economy revolves around ‘recycling’. Modern circular and regenerative forms of consumption—so far limited to a few high-end categories—represent a promising alternative and are gaining ground.“

The day witnessed the attendance of eminent speakers such as Bernhard Wrabetz, the Austrian Ambassador; his excellency Bernie Meyer, the American Gandhi; Tara Sethia, Professor of History, founder and Director of Ahimsa Center at California State Polytechnic University; Dr. S R Maley, scientist who has worked extensively in the fields of agronomy, biotechnology and environment in India and abroad, with a special focus on solid waste management.

The birth centenary of Acharya Tulsi (www.acharyatulsi.in), the IXth Head of Jain Shwetamber Terapanth is being celebrated from November 5, 2013 to October 25, 2014. An important event in the chain of year-long celebration is the Anuvrat International Conference.  It provides an opportunity for interaction with renowned Scholars, International Presenters and Delegates. It is a forum for dialogue about the relevance of Anuvrat philosophy and principles in our day to day lives. The aim is to enhance awareness about the peaceful and spiritual Anuvrat Movement around the world.

Acharya Tulsi is also founder of Anuvrat Movement. Anu means atom & vrat means vows, Anuvrat meaning atomic or small vows. Anuvrat is a philosophy coined to represent the minimum ethical code of conduct for all human beings. Anuvrat can be put in practice by person of any religion, creed or culture.
at 10:03