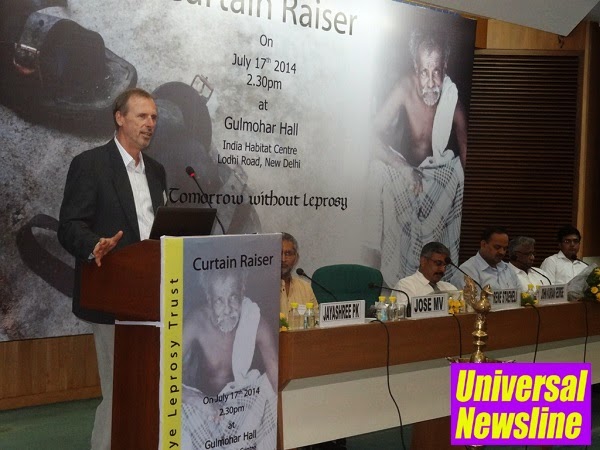 New Delhi, July 17: Representatives from the field of health, government of India, stakeholders in the fight against leprosy and the World Health Organization came together for a two-day national consultation platform to discuss the challenges and solutions to preventing disability in the people affected by leprosy.

Leprosy, an infectious disease, that causes severe disfiguring of the skin and lead to nerve damage in the arms and legs is still endemic in a number of countries including India. However advances in the field of diagnosis and treatment, has helped treatment reach more people than ever. Yet, poor and marginalized communities stay at the greatest risk of acquiring the bacterial infection.

It is estimated that as many as 50 per cent of the leprosy cases in the world are still in India. Some leprosy patients suffer from deformities that can result in serious disabilities and require continued care.

A meeting on ‘National Consultation on innovative approaches for Prevention of Disability’ was organized here by ‘The GoodBye Leprosy Trust’ (GBLT) to discuss sustainable solutions to fighting disability among leprosy affected people.

GBLT was founded in August 2013, by five organizations that have Leprosy control work as their core area. The trust was formed with an intention to create public awareness and mobilize financial resources locally in India to eradicate Leprosy.

Renewing its commitment to the fight against leprosy, GBLT today launched its new LOGO in the august presence of Guest of Honor, Mr. Rene’ Staeheli, President of ILEP (International Leprosy Eradication Program).

“Leprosy is curable but early diagnosis and treatment with multidrug therapy (MDT) remains crucial to fighting the disease. It is in people who are left untreated that leprosy can cause damage to nerves and  limbs and causes disability. Awareness, even in the most marginalized communities and reach of medication down to the grassroots is the only way to prevent and eliminate this menace,” says Mr. Jose Manikkanathan, Chairman, GBLT.

In the two-day meeting, representatives from Government of India, Central Leprosy Division, World Health Organization, Associations of Persons Affected by Leprosy, ILEP, Leprosy Research Institutes, Consultant NLEP, State Leprosy Officers, Regional Directors from the state, came together to discuss the future of the fight against leprosy in India.

They were unanimous that for sustainability, awareness needs to be spread within the community and persons affected by leprosy and civil society need to be involved.

Dr. Jagdish Prasad, Director General, Health Services, in his inaugural remark mentioned that he was surprised to known that 330 NGO’s are being supported by International Federation of Anti Leprosy Associations. He floated the idea of adoptions of leprosy affected families by the large number of NGOs working in the field. He stated that there were a large number of NGO’s in India and if each adopted 4-5 families of affected persons, the burden can be shared and removed.

The rehabilitation, self-care, and livelihood of the families of the people affected by leprosy has to be taken care of, said Mr. Prasad.

During presentations and discussions, it was agreed that involvement of ASHAs was very important in the fight to make the services sustainable.
The recommendations of this meeting will be considered by of National Leprosy Eradication Program (NLEP). It will help NLEP to decide what practice shall be adopted at the national level to intensify efforts to prevent disability and widen awareness and knowledge about prevention.

The National Consultation was an initiative of Mr. John Kurian George, Representative of Swiss Emmaus India (Swiss Emmaus Leprosy Relief Work India), one of the trustee organizations of GBLT. He discussed his idea with Dr. M. A. Arif, Coordinator for International Federation of Anti-Leprosy Associations (ILEP) in India and Dr. C. M. Agrawal, Deputy Director General, National Leprosy Eradication Programme (NLEP). Dr. Agrawal readily agreed and mentioned that this meeting can be organized under the name.
at 11:21