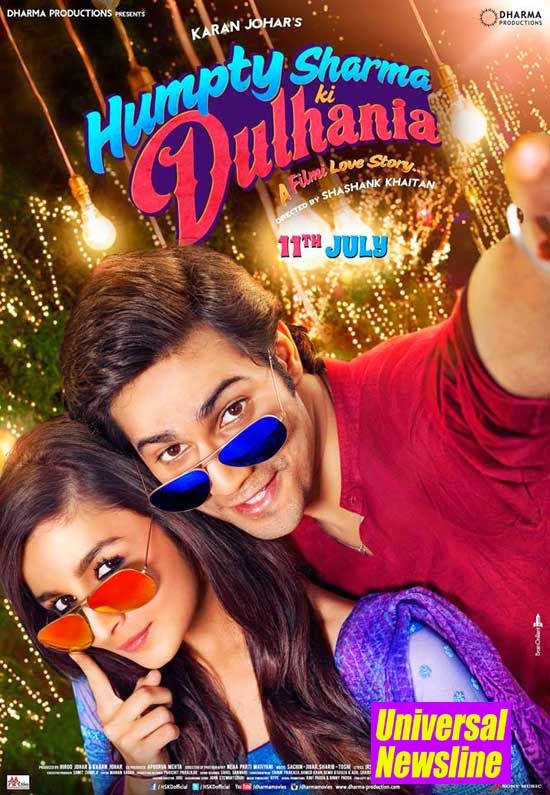 The movie begins with a discussion in a well  to do Ambala household between the bride to be Kavya (Aaliya Bhatt) and her family where the bride is demanding a 5 Lakh designer  lehnga (wedding dress for the bride) for marriage in direct competition to her  friend’s 2.5 lakh supposedly Manish Malhotra Lehnga which her friend  has confirmed she will wear.

The father ( a subdued Ashutosh Rana) categorically refuses such an expense determined to get the same on her own accord she goes off to on a month’s vacation so that she can make enough money to realize her dream.

Here in Delhi our hero Humpty (Varun Dhawan) a typical collegiate  in his last year is the darling of the college who sometimes resorts to selling exam paper to the girls for reasons best known to people his age.

He along with his motley group of friends aptly named Shaunty and Pouplu at mid night raids  the house of the history professor to actively persuade him to pass him in the paper, that’s when he meets his sweet heart and it is love at first sight for him.

From then on till the interval it is all about trying to get the girl to love him , in his quest to do so he even rescues the girl’s best friend  from a blackmailer and gets her money back and also arranges the money for her lehnga as promised with his friends and daddy cool also chipping in their bit. That’s when the temptation gets the better of both and they vow their undying love for each other .

The girl gifts Humpty his dream car with the money (gift of the magi) and goes  back to Ambala to get married to the man of her father’s choice because she knows her father would never allow her match with Humpty.

This is when unable bear this the hero follows  to her hometown and it is  a DDLJ déjà vu from then on, only difference being the bride’s father knows their love story and gives Humpty a week to prove that the groom to be (Siddharth Shukla) is  not fit for his daughter, but as luck would have it he turns out to be Mr. Perfect. The station seen towards the end is a homage to DDLJ.

Pace of the film is fast the editing is crisp the lead pair is in their element .

Though low on story it is well presented with right dose of sentiments and high dose of good clean entertainment.
at 09:07